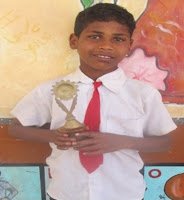 Kiran Arun Helam was enrolled in ZP school, Nasrapur in Std 4. He is from a temporary slum of Katkari (fisherman) community near Cheladi Phata. They are a scheduled tribe whose main occupation is fishing; and in rainy season they do odd jobs. Education is of no importance to them as their work does not require any education. They involve their young children in their work and as a result the children are also not interested in attending school. After a lot of persuasion, few children from this community were enrolled in school. Kiran was among them. He participated in the school’s Sports Day and stood First in 100m Race and High Jump. He then took part at the Block-level competition and again stood First. The next level of competition was at Taluka level which was held at Bhor. Once again, Kiran represented his school and stood First in 100m Race and High Jump! Three children at Taluka level brought fame to their school and Kiran was one of them. 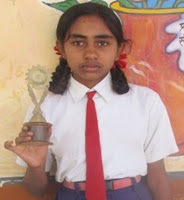 Ujwala Rajendra Gurav from Katkari slum, Cheladi Phata is a student of Std 4. Last year, the ECC team had enrolled her in Std 3. Unfortunately, the school is approximately 2km away from the slum. As it is, her parents are not very motivated to send her to school. Therefore, irregular attendance during last year resulted in the girl dropping out of school. This year, the ECC team again worked with the parents and with regular meeting and follow-up, Ujwala started going to school regularly and developed interest in studies. She took part in Sports Competition held in school and stood First in various competitions. First she participated at Block level competition in “Shot Put” and won the prize.  Later she participated at Taluka level, where about 40 schools took part. Once again Ujwala stood First in “Shot Put”. She was very happy and excited. She proudly showed the Medal to her parents. Her teachers and parents are very proud of her.